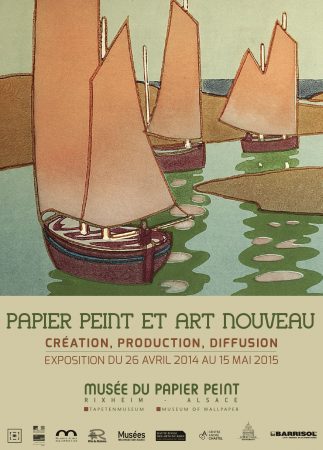 This exhibition, which deals with wallpaper during the Art Nouveau period of the late 19th and early 20th century, is not the first that the Museum has organized on this subject. From 1997 to 2002, the travelling exhibition entitled Art Nouveau Wallpaper laid the foundations for a better understanding of the production methods at this time by drawing on the wealth of materials preserved at Rixheim. It thus opened the way for further work which was particularly concerned with looking at the actual distribution of these products. This exhibition aims to report on recent progress in the research arising from a thesis published in 2012 by Jérémie Cerman (Le papier peint Art nouveau. Création, production, diffusion, Paris, published by Mare & Martin).

From the time of its revival in England by William Morris and the artists of the Arts and Crafts Movement up until the emergence of Art Nouveau in continental Europe, wallpaper had been the focus of attention on the European artistic scene. Designs by the great names of the age, such as Hector Guimard, however, were still restricted in their use, and collaboration between decorative artists and industrialists made up only a very small part of the mass of wallpapers placed on the market. Nevertheless, at the same time, manufacturers, and the specialized designers they employed, began to adopt an aesthetic inspired by Art Nouveau, until by 1900 these patterns constituted the majority of the commercial collections and continued to do so for several years to come. Thanks to this use of the modern style by the industrialists, and notably by those who used mechanical printing techniques to manufacture less expensive products, these wallpapers had the potential for delivering this style, en masse, to the interiors of the Belle Époque.

Similarly, the various advertising materials used for these products, such as the covers of sales leaflets, were themselves immersed in the style of 1900 and likely to influence the consumer to choose items in the same style. There is a great deal of evidence to show the actual use of Art Nouveau wallpaper ranging from remains which have been preserved or removed in situ, to photographs of old interiors, and walls decorated in that style. They demonstrate that this esthetic was used, through the medium of wallpaper, to brighten up the everyday lives of all social classes, thus living up, at least in part, to the Art Nouveau ideal. Following a long period in the wilderness, Art Nouveau has finally become a period style which is still inspiring designers. Thus, in the 1960s and 1970s, a number of pop wallpapers heralded a resurgence of the decorative repertoire of the Belle Époque; and those of the early 21st Century, marked by a “pattern comeback”, are again offering new interpretations of the Art Nouveau style.

This exhibition is organized as part of a collaboration between the Rixheim Museum of Wallpaper and the Centre André Chastel, research laboratory for art history (UMR 8150), in Paris. The exhibition has benefited from items loaned by the Bibliothèque Forney in Paris, the Mulhouse Industrial Society and from the Museum of Fabric Printing in Mulhouse, as well as private collectors. Barrisol in Kembs, InCréation in Paris and Allegretti Antiquités in Mulhouse have generously provided their support and the wallpaper companies Sanderson and Cole & Son have donated several examples of their work. 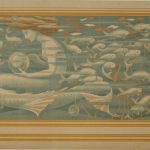 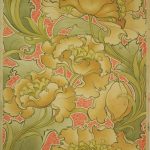 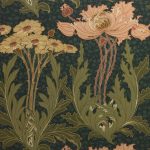 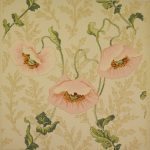