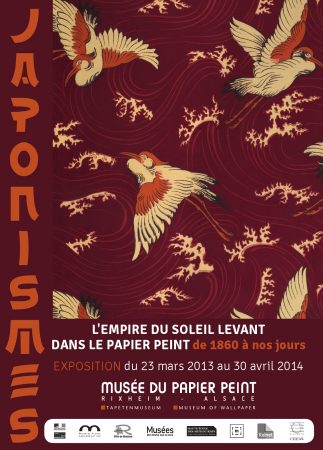 The influence of Japanese culture on the development of the arts and crafts movement, on impressionism and on art nouveau has already been studied; but to date there has been no specific study of wallpaper.

Responding to the exotic taste of their customers, manufacturers developed a corresponding collection of motifs from the 1870s onwards, although references to Chinese and Japanese art were intermingled. Fans and emblems, chrysanthemums and pine trees, cranes and herons, Mount Fuji, pagodas and kakemonos can be found on wallpaper as well as adorning fabrics and ceramics. The Zuber factory in Rixheim produced two panorama wallpapers with Japanese landscapes, the first from 1861 onwards and the second in 1902. The influence of Japanese art can also be seen in the choice and representation of flowers and birds: chrysanthemums and cherry or plum blossom, cranes and sparrows are naturalistically depicted with an economy of style which was quite new to European art. The arrangement of several motifs (images which fill the tableau, asymmetrical layouts, two-dimensionality) clearly harks back to Japanese woodblock printing. Subjects inspired by Japan can also be found in the collections of 20th century wallpaper manufacturers, albeit sometimes with a sense of caricature. The timeless themes of geishas and lanterns can still be classified by date, however, based on their colour scheme, representational nature and the composition of the friezes and recurring motifs.

For several years, there has been a renewed fascination for Japan, manifesting itself among consumers in very different ways. Younger people are familiar with Japan because of mangas, animes (Japanese cartoon films) and computer games. The traditional images are disseminated via cosplays and other historical-fantasy roll play games (samurai battles). Subjects inspired by Japan offer today’s designers a collection of forms which they can easily draw upon for developing contemporary new creations. The Museum of Wallpaper warmly thanks the manufacturers and (online) retailers, who have loaned us the wallpaper exhibited here: 4Murs, Lutèce, E-papier-peint, InCréation, Neodko, Ohmywall, Pixers, Atelier LZC, as well as the artists Virginie Blancher and Philippe Goron. 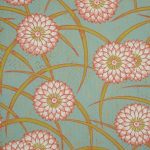 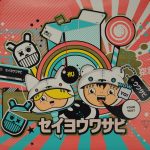 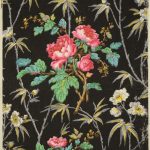